The fantasy version of Operation Com*Bat, a dismal turn-based wargame from Merit Studios. Read my review of that game -- everything I said applies to Medieval Warriors since it's based on the same engine. Tedious, boring, and uninspired to say the least. For a great fantasy/historical tactical wargame, SSI's venerable Sword of Aragon is far superior. Thumbs down for this Real Dog. 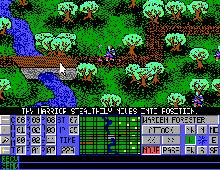