Although quite well received upon first release, Medieval Lords had many bugs that were not fixed until patch 1.1, which was not widely available and so this game never took off. It is a very historically accurate recreation of the period from 1000 AD to around 1400 AD. Advise a king or sheik from any nation in the world and deal with taxes, war, diplomacy, the Pope, real historical events and personalities, plus many other things! Overall, a far more effective use of the Storm Across Europe game engine. 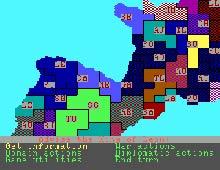 People who downloaded this game have also downloaded:
Kingmaker, Lords of The Realm 2, Master of Magic, Sword of Aragon, Machiavelli The Prince (a.k.a. Merchant Prince)