Legal Crime is a great Internet-only real-time strategy game from Byte Enchancters that died an early death, despite a very novel premise and well-designed game engine. Adrenaline Vault's review says it all:

"In Legal Crime, you take your place at the head of a crime family and attempt to expand the boundries or your territory and size of your wealth through extortion, illegal business, bribes, and, of course, violence. You'll begin the game with a small headquarters, a cache of money, and only your wits and some brute force with which to build up your empire. Your brute force comes in the shape of gangsters, like Vito Batteglio or Mack Marantani, who come both appropriately armed and stereotypically named. Armed with baseball bats and guns, you can begin to "convince" area businesses that paying you for protection is a really good idea, and failing to do so could be dangerous to their health.

Being a mobster-type, you'll want to branch out from "just" collecting protection money from legitimate businesses. You can also take the establishments under your control and turn them into even more profitable illegal ventures. There are five types of criminal ventures that you can turn a legit business into -- bootlegging (alcohol), entertainment (prostitution), gambling, and troubleshooting (hit men). Getting into these lines of work isn't cheap, but is almost always greatly profitable.

There are a number of other buildings that play a supporting role in the game. To recruit gangsters at a faster rate, you'll need training centers. These buildings will provide you with gangsters more frequently and they'll be, well, trained in being mean and threatening convincingly, or something. Collection centers allow your collectors to reduce the distance they have to travel in order to deposit the money they are carrying from your illegal enterprises. This prevents them from getting "knocked off" in transit and enables you to get the money into your pockets quickly. Finally, there are stakeouts, which are essentially ambush sites from which your gangsters can strike out at the enemy.

In this game, money talks and he who has the deepest pockets can often exude the greatest influence and ultimately determine the outcome of the game. To this end, bribing is very helpful. Since you'll be operating some businesses that are illegal, the police may become greatly interested in your affairs. Heck, if you pay them enough, you can even get them to raid your enemies' businesses and put a dent in their plans and their bank accounts. You'll need to bribe them to keep them from shuting these operations down. You can bribe the army to get better weapons, which means bigger and badder henchmen for your mobster army. Bribe the FBI to get information about other gangsters. Buyng off local politicians can aid you in passing laws in your favor, such as gaining a special permit to establish a casino.

You'll spend your time doing several things. You need to decide how much of your money to save, use to bribe different groups, or use to hire more gangsters. Gangsters, by the way, don't do this job just because they enjoy beating up and killing people (ok, maybe that's part of the reason they do it). Still, they don't come cheap and if you don't have enough to pay them, they become neutral and will roam around and attack both you and your enemies. You'll also need to decide when the time is right to attack a neighboring gangster and cut in on his action.

It may not be the flashiest strategy game to hit the PC, but it's certainly one of the most original. In this age of clones and copycats, Legal Crime has the guts to be neither, and it pays off. It's original, it's fun, and the gameplay is nearly unlimited. So take my advice -- grab your fedora and that violin case. Lefty says there might be trouble at the joint tonight, and the boss don't want no messups." 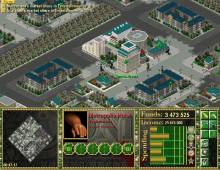 People who downloaded this game have also downloaded:
Lords of Magic: Special Edition, Imperialism 2: The Age of Exploration, Monopoly Tycoon, Machiavelli The Prince (a.k.a. Merchant Prince)