Laserwars is an interesting game of strategy-based battle game. As the game's descriptions put it: "Luck may be involved depending on the options that are set. The game is played on a square grid. There are two players. They can be any combination of human or computer players. The objective is to kill the other player by hitting him with your laser. Each player has a ship which he can rotate and move. In addition mirrors are placed on the grid to deflect the lasers. Each mirror that is hit amplifies your laser, therefore allowing you to get closer to your enemy and kill him. There is also an option to play with bombs and blocks, which make the game more interesting. There are many parameters that may be set for varied gameplay. The game is mostly mouse driven, with a few text prompts here and there."

Since hitting mirrors increases your laser's length, it is important to make you laser hit as many mirrors as possible so that you may reach your opponent. There are many moves a player may make. You must be aware of all of them so that you may defend yourself, as well as plan offensively. There are many actions you can perform during your turn: you can place mirrors, remove them, move your ship, and rotate your ship. The game is easy to learn, but takes time to master as you will need to prioritize your moves and place mirrors effectively. Definitely a fun twist on the familiar gameplay of Deflektor, Laserwars comes highly recommended as one of the most original two-player games you will come across. 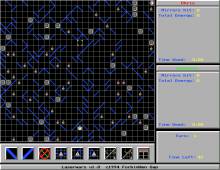