A decent puzzle game that is best described as Othello in 3D. In this board game variant, you and the computer player take turn placing Kengi (small aliens) on the game board. Each player scores by placing four or more of his/her Kengis to line up in any direction. The goal, of course, is to have a higher score than computer player when the board runs out of space.

What makes Kengi more interesting than an average Othello variant is the fact that there is not just one, but *five* boards-- stacked up on top of each other. You can therefore score by not just lining Kengis on one board, but on four different boards-- the pieces just have to be directly on top of one another. This makes for an interesting game, as you have to think vertically as well as laterally. Unfortunately, you can't freely place Kengis anywhere you want to, and these restrictions to the rule are quite opaque and make the game a bit frustrating-- it's difficult to tell where you can or cannot place the Kengis. Worth a look if you like Othello, but by no means a must-have. 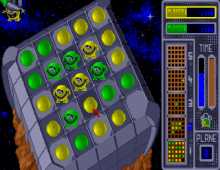