A breakthrough in backgammon games, JellyFish is a very strong backgammon program based on neural net algorithm that will challenge even the best backgammon experts. The official claims are lofty: "at the highest playing level [the game] matches the best humans in the world, and on the very fast level 5 a top human will hardly win more than 55% of the time. Also, its use of the doubling cube is outstanding. JellyFish is able to play matches of any length, or 'money games' where each point is equally valuable."

The game plays as good as it claims. Thanks to artificial neural networks, the game "learns" to play better backgammon from experience. This means the game will get better every time you play. The commercial version of the game even looks over your plays and points out whenever you make a serious error. This is an extremely valuable tool for learning and improving your game. For the serious student of the game, JellyFish is an absolute must-have. This download is the freeware version 3.0 of JellyFish Player that allows you to edit positions, although it does not include the hint or analysis functions of commercial version. 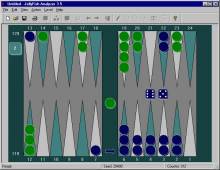