Jang-gi is a competent, no-nonsense computer version of Chinese chess that plays a decent game without the frills of commercial titles. If you enjoy Chinese chess, this freeware game from Korea is well worth a look for its tough AI. It has only the most basic options (including show captures, rotate board, etc.), and doesn't provide any on-line hints or rules. Beginners to the game should take a look at a more complete commercial release such as Interplay's Battle Chess 2: Chinese Chess instead. 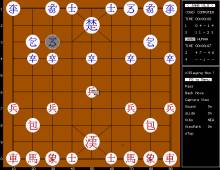