Invader is a solid computer implementation of Amazon, an intriguing 2-player board game based on chess invented in 1988 by Walter Zamkauskas of Argentina. In Amazon, one player controls 4 red pieces while the other controls 4 blue pieces. The red player begins. Each amazon can be moved in a straight line (horizontal, vertical or diagonal - exactly like the queen in chess), and once it stops, it throws a bullet in a straight line, in a similar way. That bullet will remain in that square for the rest of the game. Moves and shoots can be made as far as desired, but without passing over other amazons or bullets. Each amazon and bullet must land in an empty square. Amazons cannot capture each other, and so all eight pieces will remain in the board at all times. The first player who cannot move (i.e., is blocked, by bullets and or amazons) loses the game.

Invader is a good implementation of this intriguing chess variant for Windows. In addition to many cosmetic options (e.g. changing board colors and size), it allows you to change the difficulty level indirectly by specifying the timeout for each move, as well as "depth count," i.e. how many moves the computer should process to determine its best move. This means you can play against the computer of similar skill level if you cannot get a friend to play hot-seat with you. If you like chess or board games in general, check out this fun old game. Recommended! 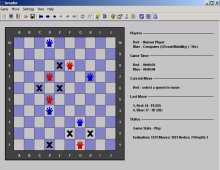