Hana-fuda is a solid Windows 95/98 version of a traditional Japanese card-matching game of the same name. Hanafuda cards are often known as 'flower cards', because each suit is depicted by a different flower. There are many rule variations for Hana-fuda, but this game (fortunately) follows a simpler but no less enjoyable rule set. For the uninitiated, Hanafuda or Hanakaruta (karuta, from Portuguese "Carta") is a gambling card game that has no equivalent that I know of in Western card games (please let me know if this is inaccurate). The game uses a 48-card deck, which is divided into twelve-card suits, each representing the twelve months of the year. Each of the 48 cards has different point and name. There are 3 types of cards: cards depicting animals or figures are worth 10 or 20 points each. Cards depicting a Tanzaku (A strip of poem writing paper) separated into 3 styles - Red strip with poem, Normal red strip, and Normal blue strip. All are worth 5 points in the game. Cards depicting plants with no other objects, called "Kasu" or "Trash" cards, are worth 1 point.

The object of the game is to score as many points as possible by winning point cards and forming combinations. Point cards have a graphic in addition to a flower or plant design, and are won by matching that flower or plant design. For example, the Cactus by itself is a zero-point card, but the Cactus with Stork is worth 20 points. If the Cactus Stork is in the center-pile, you can throw any Cactus card from your hand to match and win it. Or if you have the Cactus Stork in your hand and there is a Cactus card in the center-pile, then you should throw the Stork to match and win it. This freeware computer version features authentic cards, decent computer AI, and a good on-line help that explains the basic rules. Overall, a faithful reproduction of a fascinating Japanese pastime that more people should know about, even though it will take a while to familiarize yourself with the cards. 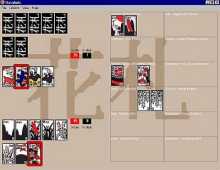