Undoubtedly the worst game Bullfrog ever released, Gene Wars is a prime example of a great concept botched by poor implementation. The concept, as with all Bullfrog's games, is very intriguing: in this mission-based real-time game, your task is to find various animals, sample them, breed them and then attack your opponent with them. You can breed two different kinds of animals to create hybrids (flying mules, for instance), strengthen your animals by sampling others, and other lab tricks. Unfortunately, once you get into the game and the novelty wears off, it becomes a very tedious affair. In a rare event, GameSpot' review by Ron Dulin echoes my thoughts almost exactly on what is wrong with the game, so I'd like to quote most of his excellent review here:

"What's most disheartening is that it is almost impossible to judge the game itself because the process of accomplishing the various tasks assigned to you is just so aggravating. This is primarily because events happen so damn fast - you're trying to move your guys, gals, and beasts all over the map to perform their duties, all the while beset upon by your enemies' forces and the local creatures. On more than one occasion one of my specialists was dead before I could even scroll over to a problem area and remedy a situation. Other unfortunate traits add to the frustration, such as the fact that it is inexcusably difficult to select an animal unit (you must click exactly on its little physique, which more often than not is moving about at rapid-fire pace), and the fact that sometimes your units just don't respond to your commands. There are solutions to these problems, but learning them is just as time-consuming as trying to do things intuitively. Even more strange is that this comes from the makers of Populous, which had one of the most ingenious and oft-imitated interfaces of all time. The game is also unrelentingly unforgiving. Any major guffaw results in having to restart a scenario, which in itself is not inexcusable. What is inexcusable is that there is no built-in-manner of restarting said scenario. More than once I realized that I was in a losing position, and had to restore a game several missions previous and work my way back. Sure, maybe that's a lack of foresight on my part, but is it too much to ask to simply be able to restart a mission?

Or how about the ability to slow the game down a bit to get a handle on what's happening? The real heavy-hitters in the strategy game department (WarCraft II, SimCity, Bullfrog's own Populous) have always had one thing in common: they give you time to appreciate your accomplishments. There's the feeling of looking out over your creation and saying "it is good." But Gene Wars never even gives you a chance. Bullfrog had a similar problem with Theme Park, albeit to a lesser degree. There's not a great level of detail to worry about in Gene Wars, but once a scenario gets cooking, you never have time to stop and smell the crabomules. The result is that the game is never enjoyable, simply frustrating.

So much care was put into the atmosphere of the game, that it is a shame to see it go to waste. The graphics are wonderful and the retro sci-fi sound effects, from the ambient sounds to your specialists' shouts, are hilarious. But until Bullfrog releases a patch which addresses the problematic issues, we'll never get a chance to play the wonderful game that undoubtedly exists within."

There you go-- a very fair, in my opinion, post mortem analysis of a game that should have been so much more. And Ron didn't even touch on my biggest gripe of the game: the seeming lack of artificial intelligence of any kind. Apparently the game was received so poorly (and deservedly so) that Bullfrog never released a patch. Oh well-- no big loss. Overall, Gene Wars is a huge disappointment, especially to Bullfrog fans who are accustomed to their hallmark classics. It's saved from Real Dog tag only by the virtue of intriguing concepts behind the game.

Note: If you want to try a good game about genetic engineering, don't despair: a better game in this vein exists, and it is leaps and bounds better than Gene Wars despite getting much less hype. That game is Maxis' Unnatural Selection, and in our opinion the best game ever made about genetic engineering (at least until Mindscape's Creatures, but that one is a more of a toy than strategy game). 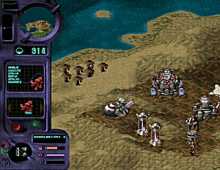