The Imagination Series games are admittedly the worst of KOEI's games, and this first offering unfortunately doesn't bode well for the future of the series. In an amalgam of a plot involving dragons, wizards, and rival aristocratic families, play one of the four families who must regain control of the Gemfire and conquer the kingdom. In contrast to KOEI's classic games, commands in this game are very simplistic and the gameplay extremely simple. Good for beginners in the strategy genre, perhaps, but even they will wonder whether the game is worth playing at all. 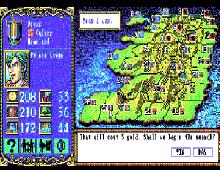