Focus (a.k.a. Domination) is a fun and unique board game invented by Sid Sackson, the legendary creator of Diplomacy, Acquire, and dozens of other classic board games. Bob Claster, maintainer of the one and only Sid Sackson fansite says it all about this classic that was converted into a great freeware PC game by David McCammond:

"This time, Sackson set out to reinvent the abstract strategy game, and Domination is like Checkers on Viagra... The game is played with colored dome-shaped pieces, which start out symmetrically laid out on a grid. At the start of the game, each piece can move one space either horizontally or vertically, and will go on top of the piece it lands on, creating a stack that is two pieces high. The player whose piece is at the top of the stack has possession of it, and is the only one who can move it.

Here's the very cool part. Once a stack is two pieces high, it must move two spaces. A stack that's three pieces high must move three spaces. And so on, going up to the maximum of five high. If you control a stack that's three pieces high and want to move it only two spaces, you may only move the top two pieces in the stack. Obviously, you won't want to do this if the bottom piece is your opponent's, as it'll allow him to regain control of it. (However, there are times when this is exactly what you want to do, for strategic purposes.)

A stack can be no larger than five pieces high. If you move a two-piece stack onto a five-piece stack, the two pieces on the bottom come off the board. If they are yours, you get to keep them and can put them back on the board anywhere you like as your turn sometime later in the game. If they are your opponent's, they are captured permanently. Having these reserve pieces is crucial late in the game, as they can not only be put on vacant spaces, but also on top of an existing stack, possibly regaining control of it for you.

You win the game when you're the only player who can still make a move. By the way, the game comes with pieces in four colors, for up to four players, but the mere thought of this game for more than two players makes my head spin. Typical Sackson. Like most of the games described above, it's simple in conception yet completely original." If you enjoy original and challenging board games, Focus is a masterpiece by master game designer you wouldn't want to miss. 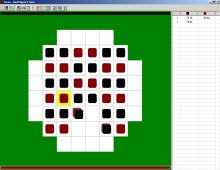 People who downloaded this game have also downloaded:
Castles, Emperor of The Fading Suns, Master of Magic, Evolution: The Game of Intelligent Life