A very little known game, Fire Zone is an ambitious tactical-level wargame that boasts PSS' usual top-notch AI, but unintuitive interface and questionable logistics. The game is similar to QQP's celebrated The Perfect General II in that it is a hypothetical wargame that's not grounded in any historical battle. You control either the "League" or "Combined" side in a fight to the death. Production is very simplistic, although the varied types of combat units you can deploy (e.g. the "leviathan" tanks) make for some interesting battles. Unit statistics are vastly simplified, though-- encounters are resolved simply by comparing the "attack" and "defend" statistics of the two sides, although terrain do have marginal effects. Overall, a neat little gem that's notable more for its efforts than for real longevity or addictiveness. Definitely worth a look for all fans of futuristic wargames e.g. Ogre. 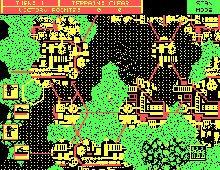