Fight for Fame is an excellent shareware real-time strategy game for one to six players set in the eigth century. The multitude of options makes Fight for Fame a deeper game than most RTS titles. You are a recently appointed king of the Normans, and your task is to contend up to 52 other ambitious kingdoms which are controlled by strong AI. You control every facet of your empire, from economic, military, and trade policies. You must conquer regions, build up the wilderness, hold your land from all enemies, establish trade and diplomatic relations, and much more.

Like most other strategy games,the key to success in Fight for Fame is good balance between economic prosperity and military prowess. Unlike most other budget strategy titles, Fight for Fame lets you decide the minutiae of empire management, including which buildings to construct, how many clerks to enlist, and many other details. There will be NPCs who offer their help, and you can even organize dynastic marriages with other kingdoms for improved political relations.

On the military front, Fight for Fame emphasizes 'grand-scale strategy' than tactical options. You can create armies of different kind and skills and send them against hostile armies, capitals or fortresses. You can hold tournaments to hone the skill of your army. Wargame-style "fog of war", recon, and supply rules allow a concise strategic planning. There are many diplomatic options you can use, including several ways to sabotage their empires. Similar to Castles (but less plot-based and more random), events will occur throughout the game that keep diplomacy in constant flux - and makes for a very interesting game.

On the downside, the graphics in Fight for Fame is nothing to write home about, and the interface is confusing and not very intuitive. Once you get used to the interface, however, there is really not much else wrong with this highly underrated shareware gem. Whether or not you are a history buff or strategy game fan, you definitely should check out this excellent game that will surprise you with its breadth of options and gameplay depth. Highly recommended! 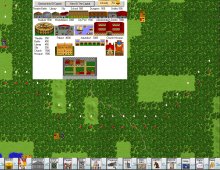