Durak is an excellent PC implementation of Russia's most popular card game of the same name. In this excellent card game for four players, there is no winner - only a loser ("Durak" in Russian means "fool"). The rules, in short, are as quoted on Net Durak site: "[Durak] is played with 32 cards: the A, K, Q, J, 10, 9, 8, 7 and 6s from a standard 4-suit 52-card deck are used. At the start, each player is dealt six cards, which are played in a series of bouts of attack and defence. After the players have received all their cards, reveal the top card of the deck. Place it on the middle of the table, place the deck on top of the revealed card, covering it half way. This card represents the trump suit and is now at the bottom of the deck. Cards in this suit hold a higher value then the Aces of the other suits. Within the trump suit card hierarchy is maintained. When a player's hand is reduced to fewer than six cards it is replenished from the talon of undealt cards. After the talon is exhausted, there is no more replenishment and the aim is to get rid of all the cards from your hand. The last player left holding cards is the loser. This player is the fool (durak) and is ridiculed by the other player."

The importance of both attack and defense makes Durak a much more "combative" card game than, say, Gin Rummy or Bridge. This freeware version coded by Serge Birj offers excellent computer AI, a clean mouse-driven interface, and faithful rendition of the rules. It is a pity you can only play against the computer and there is no way to adjust the difficulty level, but that is a minor nitpick given the strong engine. If you like challenging card games that rely very little on luck, Durak is a must-have. 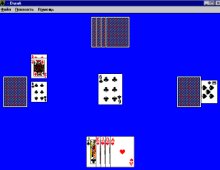 People who downloaded this game have also downloaded:
Cyber Empire (a.k.a. Steel Empire), Emperor of The Fading Suns, Evolution: The Game of Intelligent Life, Sting!, The (a.k.a. Der Clou! 2), Constructor