The Dune Emulator is a superb PC implementation of Avalon Hill's classic boardgame Dune. In the author's words, "[this] is a labour of love undertaken primarily as a means of learning the Allegro game programming library." Although the game unfortunately does not have any computer players, it does offer a wide variety of multiplayer support that makes it ideal to play with friends long-distance. In addition to the turn-based hotseat mode, you can also play by e-mail (PBEM) as well as over the Internet via TCP/IP. The game is extremely faithful to the boardgame and its expansions, and plays very well.

So what exactly is the Dune boardgame and why is it a classic? The short answer is: because it manages to use all the great and unique ideas in the book as gameplay mechanics, while balancing the difficulty level and keeping the goals realistic. It even manages to tie the book's plot into gameplay and objectives - a remarkable achievement you won't find in other licensed boardgames. The game is designed for six players, each of whom adopts one of the characters/factions from Frank Herbert's famous book: Atreides, Bene Gesserit, Emperor, Fremen, Guild, and Harkonnen. The object of the game is to seize at least three of the five strongholds on the planet Dune. This is done with a combination of economic, military, and religious might, with a strong dose of treachery. The rules may seem complex at first for casual gamers, but once you learn the ropes they become logical and easy to remember.

A game begins with everyone tossing all of their leaders (five for each faction) into the middle of the table. Then, everyone draws four at random. Each person then jots down one of the leaders belonging to someone else as their traitor. A traitor will lose a battle for someone if he/she plays it against the person who drew it. A turn progresses as follows: first, the player order is determined by a storm that sweeps around the board a random distance each turn. The storm also kills anything in its path that is caught on the sand. Then, in the second part of the turn, a spice blow happens, placing spice (the currency of the game) on the sand somewhere. The next phase of the turn is a bidding round. Everyone gets to bid (blind) on Treachery cards using spice. The Treachery cards are generally items that are useful. These include projectile and poison weapons and defenses, disposable heroes for battles, mystical "Karama" cards that do weird things depending on the character, etc. There are, though, five worthless cards that do nothing, and force you into battle to discard.

The next part of the game is the revival and movement round, as well as battles if they occur. Because of the Bene Tielaxu, death is not permanent in the game. Dead leaders may be revived as gholas, either with the Bene Tielaxu Ghola card or for a fee once all leaders are dead. Troops are also revived (everyone has only 20 tokens) at varying rates, depending on the character. Additional troops can also be bought, up to a maximum of three revived in one turn. Movement is fairly straightforward: each player may make one shipment and one movement each turn. A shipment is usually from off-planet using one of the Guild's ships. This costs spice. A stack of tokens may then move one space. There are some exceptions here, though. The Fremen ship from the far side of the planet, so they enter the board differently. They may also move two spaces instead of one. And whoever controls Arrakeen or Carthag has access to ornithopters, and may move three spaces each turn. Whenever two players are on the same space, except under certain very rare conditions, they must battle to determine dominance of the space. This battle involves no luck: just a straight comparison of the 'value' of the leader card as well as any weapons/defenses cards you decide to use.

The last part of the turn is collection. Everyone with tokens in spaces with spice takes some (3 spice per token), and whoever owns Carthag, Arrakeen, and Tuek's Sietch gets a bit of spice in taxes. Then the turn starts over if no one has won.

The most fun about the boardgame and this PC version is that each character/faction may break the above rules in his/her own individual way. For example, the Atreides player is able to see into the future. He can look at the next turn's spice card, he does not bid blind, instead looking at each card before it is bid on, and may ask to see one element of an opponent's battle plan (troops, leader, weapon, or defense) before he decides on his own. The Bene Gesserit can make a prediction at the beginning of the game, naming a player and a turn. If that player wins on that turn, then the Bene Gesserit player wins instead. The Bene Gesserit also has access to the voice, being able to command someone to play or not play certain cards during battle. Finally, the Bene Gesserit has a powerful and subtle ability to "co-exist". The Emperor's military might gives him five starred tokens to represent his Sardaukar, and everyone who pays for a Treachery card gives him the money. He is very rich, usually. The Fremen are the most powerful single faction in the game (this is usually offset by their extreme poverty, at least early in the game). In addition to their high movement rate, free shipping, and high recovery rate, they also get to know in advance where the storm will move, are not eaten by worms, and suffer only half-losses from the storm. They also have three starred tokens for the Fedaykin. The Guild, of course, is paid for all shipping that occurs in the game. They also have the ability to go whenever they want during a turn. These abilities might not seem like much, but extreme wealth plus an ability to preempt can go surprisingly far. Finally, the Harkonnen excel at treachery. Everyone else is limited to four treachery cards, but the Harkonnen can have up to eight. In addition, they name every leader that they draw at the beginning of the game as traitors. And they get to capture an additional leader from a defeated opponent (Thufir Hawat in the book) to either use in battle or kill immediately for spice.

The game even allows players to strike alliances: when two or more players enter into an alliance, their tokens now count toward victory together (so if they control four strongholds between them, they win the game). They also get to loan certain abilities to their ally: The Atreides can see his ally's opponent's battle plan, the Bene Gesserit can voice an ally's opponent, the Emperor can loan money to his ally, the Fremen's ally is not eaten by worms, the Guild's ally gets to ship for half-price, and the Harkonnen's traitors will also betray his ally's opponent.

The only "bad" thing about this game is that it only lasts fifteen turns. If, at the end of that time, no one has won, then the Fremen win if certain things happen on the board (mostly that they've kept the invaders from the wild territories). If that doesn't happen, then the Guild wins (they've kept Dune neutral). All in all, The Dune Emulator, much like the boardgame, succeeds in bringing the Dune universe to life. Whether you like the book or board games in general, this is simply a must-have. A classic that's well worth asking friends to play with. 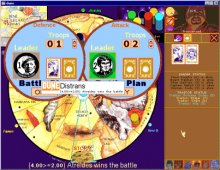