Dragoon: The Complete Battles of Frederick The Great

Dragoon: The Complete Battles of Frederick The Great is an excellent squad-level wargame from independent developer Art of War, now changed its name to Boku Strategy Games. Wargame veteran Robert Mayer says it all in his comprehensive review at CDMag.com:

"Art of War's Dragoon is something of a throwback. It's a narrowly focused wargame on a subject mostly of interest to hard-core military history fans. It uses a turn-based, initiative-focused game system to simulate a collection of 18th century battles that even most well-read non-military historians would be hard pressed to identify. Graphically, it's adequate, if somewhat Spartan, and its sound effects are fairly pedestrian. But-and this is the important thing-it works… and it works very well.... Dragoon does an admirable job of capturing the flavor of [Frederick The Great's] period, and of giving gamers the opportunity to lead the Prussian army to glory or ignominious defeat.

For experienced gamers, Dragoon immediately calls to mind both TalonSoft's Battleground games and Interactive Magic's Great Battles series. The units and maps, while nowhere near as attractive as TalonSoft's Napoleonic games, are definitely reminiscent of that series. The game system, with its focus on leaders and initiative, is very much like that of the Great Battles games. There are some key differences between this game and its influences, however. In Dragoon, units can face either hexsides (for column formations) or hex spines (for line formation), providing some interesting twists for tabletop tacticians. The game also models both morale and disruption, as well as casualties, providing a good model for the combat of the era.

While the game would be better with a more refined look, it's eminently playable as it is. Dragoon includes some 24 battles, covering all of Frederick's major engagements, and featuring a myriad of different tactical problems from massive clashes of empires down to small cavalry skirmishes. Value is not a problem here.

Virtually every command is issued via the mouse, and there are tool tips for the icon bar. Overall the game is clean, easy to get into (for a wargamer), and relatively hard to master. The AI plays a good game, especially as the Prussians' foes. It's a tad slow even on a 350 with 128MB of RAM, but hey, that's the price you pay for some AI calculations one supposes. There's a lot of tactical subtlety involved, between deciding when to change from column to line, when to charge, and where to place one's artillery; gamers used to the rifled musketry of the American Civil War period will have to rethink their entire approach to tactics. Fans of Napoleon's era will also have to make some adjustments; the armies of Frederick's time occupy a niche somewhere between those that fought under Adolphus and Pappenheim and those that would fight under Bonaparte and Blucher.

There's a scenario editor as well, though it has some quirks and isn't terribly well documented. It seems to work, but getting a scenario that does what it's supposed to can be problematic. Still, Dragoon delivers what it promises. Wargamers with a hankering for some Seven Years War action cannot go wrong with this game. Now, just think how good it could be if Art of War could actually hire artists as well as programmers…." If you enjoy the game, check out Boku's superior sequel titled Horse & Musket at the related link below. Highly recommended! 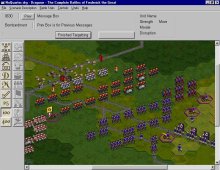 Dragoon: The Complete Battles of Frederick The Great screenshot