Combots is a below-average BASICA game distributed only among IPCO members. Due to limitations of the BASIC language and early 1980 hardware, the game amounts to little more than a quirky piece of PC nostalgia. From the MobyGames description: "In Combots, two combat robots are put in an arena to see which can hit its opponent more times with a laser in the given time limit. To play the game, the player(s) program two combots by giving it ten commands. There are three commands the combots can perform: move, turn, or fire. The combots will repeatedly follow its commands in the arena until time runs out. (For example, you could program a combot to follow these instructions: move, fire, move, fire, turn, move, turn, fire, move, fire. The combot keeps performing these actions and you have to hope when it fires your opponent happens to be in the way at the time!) At the end of the time limit, whichever combot has more hits wins." 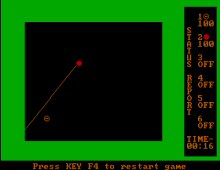 People who downloaded this game have also downloaded:
Dragonriders of Pern, Battle Commander, Dune Emulator, The, Evolution: The Game of Intelligent Life, Dune 2: The Battle for Arrakis