From the creators of Civilization, comes Colonization! A lot like Civ, but with some differences. First of all, it covers just one period of time (from the discovery of the New World in 1492. until independence), city management is somewhat different as well as combat and exploration. At the beginning You'll have to choose nationality (Spanish, English, French or Dutch) and level of skill. Then just go ahead - build a colony, raise it and, when You're strong enough, declare independence and defeat king's forces. Easy, ain't it?

In this strategy game (similar stuff as in Civilization) you have to discover America. You start in your own country (you can choose from Engeland, France, Spain or The Netherlands. When America is discovered, you have to take over political relations, with your homecountry, build cities, doing some research, etc. Goal of the game is to become independent from your home countrty. You can play the game with different diificulty settings (easy, though and hard).

The music in this game is wonderful!

In one word - a classic strategy game. Wait- that's more than one word. As a history and politics student who more than dabbles in 18th century economics, this game is a surprisingly accurate model of that eponymous event where the old world spread its wings and became the new world. When I first played a number of years ago, it was all about wars of conquest against some peaceful, undeserving Indian tribe, or my old favorites the French.

Who doesn't enjoy smashing their colonies and capturing their colonists! However, these days I enjoy creating an economic system of production costs and manipulating the European prices by storing all the cargo in warehouses then when the price is suitable flooding the market. Add in privateers, evil tyrants and those petty criminals who just can't do anything right, you've got a great combination for a game.

There are of course, some problems and room for developments. Your colonies cannot really progress beyond the stage they would be at by the early 19th century. Once you've gained independence there's really nothing left to do. It may also be interesting for colonization maps based on Australia, Africa or the Far East where the majority of colonizing went on. There is quite acceptably no mention of the major forces behind colonies from their inception; speculation and slavery. The first was essential. Plymouth Colony- the first British Colony was run by companies from London. Secondly, though it would perhaps be a little un-pc to have a game where victory depended on how many slaves one could acquire, it does perhaps need some mention.

Colonization is really very addictive and one of the most historically accurate games I've played. I can at least hope that playing colonization has in some way improved my grasp of the history of the American continent. Meier really does create the conditions where a colony can become incredibly profitable when it begins to produce for itself en masse, rather than merely importing raw materials. Though it's often difficult to entice sufficient numbers of colonists, leaving one to have to pay their passage, you can quickly find your colonies moving inland.

Colonization is rightly a classic of the genre, and more than a decade after its release improved graphics haven't produced a superior. 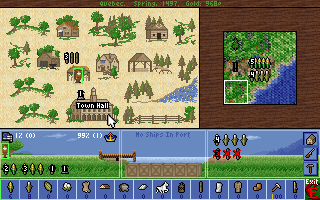