Can't Stop is an excellent freeware PC version of the Parker Brothers board game of the same name designed by Sid Sackson, legendary board game designer (Acquire, Domination, and dozens others). The game is best described as a "progressive scoring dice game" where one of the major part of strategy lies in deciding when to stop rolling the dice. The game page at Sid Sackson fan site elaborates in more detail:

There are four dice. On each roll, the player chooses how he wants to pair off the dice, making two numbers from two dice each. He's got three temporary place markers. At the start of the game, let's say he rolls a 1, 2, 4, and 6. He can call that a 3 and a 10, or a 5 and an 8, but he chooses to call it a 6 and a 7. He places two of the place markers at the bottom of the 6 and 7 columns. He rolls again. This time, he gets three 1's and a 6. The only possible combination is 2 and 7. So, he moves the marker that's already in the 7 column up one notch, and places the last marker in the 2 column.

From here on in, he can keep rolling and advancing the markers as long as it's possible to make either a 2, a 6, or a 7. After every roll, he can pass the dice and call his turn over, replacing the temporary markers with markers in his color. This progress up the columns is permanent, and he'll continue from there on subsequent turns. However, if he rolls a 4, a 5, and two 6's, he craps out as he can't make any of his numbers, the temporary markers come off the board, and he's made no progress on this turn. Once he gets to the top of a column, he has captured it, and three columns wins the game.

The beauty of the game is in that ability to keep on going. It's so tempting to try just one more roll, and so nerve-racking to know that it'll probably be one roll too many. And as much as you take the odds into consideration, dice are capricious. This is almost always a raucous game, with players taunting each other, trying to goad them into going too far, or teasing them for being chicken when they play it safe." If you enjoy abstract strategy games, especially ones that are based on mathematical concepts, this computerized version thanks to George Crawshay (compiled by Bob Claster) is well worth your time. Recommended! 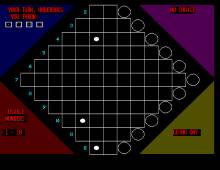