Bazaar is an excellent freeware (formerly shareware) PC version of Sid Sackson's outstanding board game of the same name. Bob Claster, maintainer of the Internet's best website about this prolific game designer, says it all about this wonderful board game that is unfortunately not as famous as Computer Acquire, Sackson's most popular game:

"Bazaar is a lovely little trading game that can be played by children as young as 7 or 8, and grownups with equal pleasure. It's played with round plastic tokens which come in five colors. There's a die with one color on each side, and the sixth side reads "CHOICE." There are four stacks of five cards called "wares," each of which has five colored circles on it. Lastly, there are ten rate cards, from which two are randomly chosen to be played with for the game. Each of these rate cards contains five different equations, which govern the trades in the game. These equations are along the lines of * = ***. This means that you can trade a red token for two blues and a green, or two blues and a green for a single red one.

The object of the game is to get the highest point score, and the way you get points is by buying the wares cards with tokens. At first you have no tokens, so you roll the die, and take the token of the color on the die. (If CHOICE is rolled, the player has his choice of token.) That's really all you can do at first, as you don't have enough tokens to do anything else. However, after that first turn, you have the choice of either rolling the die again for another token or making a trade or trades with the bank using the equations on the rate cards. At the end of your turn, you are not permitted to have more than ten tokens. When you have the right combination of colors to purchase a Wares Card, you trade in the correct five tokens for the card.

Now, here's the twist. You get points for purchasing cards depending on how few tokens you have left after the purchase. If you have none left, you get five points. If you have one left, you get three points. If you have two left, you get two points, and if you have three or more, you only get one point. So, as you can see, excess tokens do you no good at all. The available wares cards are visible to all, and you can often find yourself in a race with an opponent to get a particular card. For that reason, it might be in your best interest to buy a card even though you'll have too many leftover tokens to get you much in the way of points, just to keep an opponent from getting it. If someone gets the card you want before you do, the card is removed from the stack, and the next one is revealed.

There's a little more to it than that, as some wares cards are worth more than others, and as the game nears the end, the cards are worth more as well, adding to the suspense. Again, a brilliant mix of just enough luck to keep things fun, but plenty of opportunity for ingenuity to win the day."

The computer player in this computerized version plays an excellent game, although a bit too predictable. If you enjoy abstract trading games in general or excellent board games, Bazaar will keep you entertained for hours on end. 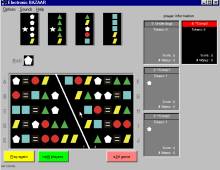