Battle of Austerlitz, The

An early computer wargame that depicts one of Napoleon's most famous battles, The Battle of Austerlitz is an innovative game that boasts real-time play and an easy-to-use interface. But like the authors' previous game Borodino: 1812, it is marred by superficial gameplay: ahistorical, arcade-style "tank rush" tactic is required to win, rather than any real military acumen. Fun for a while, but has very little replay or long-term play value. Worth a look if you are interested in the era, or collect wargames in general. For a much better treatment of the war, though, try other wargames such as Talonsoft's 1996 classic Waterloo instead. 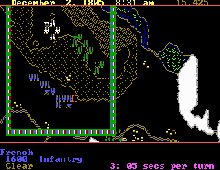 Battle of Austerlitz, The screenshot