Battle Isle is a futuristic tactical wargame, the start of the series and a predecessor to History Line (a.k.a. The Great War). In fact, players of History Lines will be able to pick this game up in five minutes, because not much was updated for the WWI game. A lot of the information contained in the review of The Great War also applies here.

The age of the game shows when you start it. First, it will run in Windows in a DOS shell, but if your PC has a screen saver or power off feature, and you come back to your computer, the graphics get all messed up. Either don't leave your computer or play the game in pure DOS. :) There is no sound, and there is no mouse support. The manual suggests a joystick, so if you have one that works in DOS, great! Otherwise, you'll just have to use the keyboard.

On the main menu, you can start a campaign (only one is available) or enter a map code to 'jump' ahead to where you were. You can play aganist the AI, which is average for its day and age, or another human. Basically, player 1 plays on the left side of the screen and player 2 on the right. Each turn has two phases, Move and Attack. You give orders by moving the icon over your unit, holding down the 'fire' button, and pressing the arrow key or moving the joystick in the direction that you want -- each one has a different command. This interface is hard enough with a mouse -- with a keyboard, its slow and hard to get used to. Graphics are simple VGA shapes, although there is clear detail on what is what.

The game has longer replay value if you play against another human, but against the AI, once you beat the game, there is little incentive to go back to. One difference between this game and later ones from Blue Byte is that you gain energy in the form of crystals on the map, which you can to build new units or repair your current ones. This makes the game a little easier as opposed to later Battle Isle games.

Blue Byte deserves credit for making one of the first accessible, realistic tactical wargames. However, between the average game play, awful controls, and fair AI, this is a game that has not aged well. New players interested in checking out Blue Byte games should start with Battle Isle II or History Line, which are much better games. Only true wargame fans or people interested in seeing how the series started will probably want to play Battle Isle. 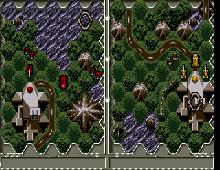