Atlas is a historical business/discovery game by Japanese developer ArtDink, famous for A-Train railroad simulation series. The German version was published by Sunflowers. The game is set in the 15th century: you are a ship captain who just signed a contract with the King of Portugal. In compensation for 10,000 gold a year, you have to explore the area 1,000 miles south of Portugal within five years. You are allowed to trade with the goods you discover, but all information gathered on your travels is property of the King of Portugal. The game is interesting for its fairly original idea and story, but suffers from being unable to create a captivating atmosphere. As such, the game is probably too "dry" for most people to enjoy. Anyone who is interested in the simulation of this era would do well to play Sid Meier's Colonization or the good ol' Seven Cities of Gold instead. 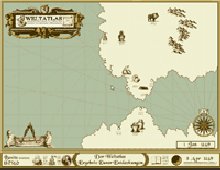