Arcomage is a fun single or two-player fantasy card game, first appearing as a mini-game in Might & Magic VII that you can only play inns. Best described as a simplified rip-off of Magic the Gathering, your goal is to either build your tower to a certain height, kill the enemy's tower, or accumulate a certain amount of resources. You draw cards that represent monsters, spells, or artifacts and they are used to produce varying effects. It's easy to play, requires a certain level of strategy, and can be finished in 20-30 minutes. This stand-alone release was published by 3DO as a budget title. You can play against the computer, or another human player via IPX or the Internet using TCP/IP or the Mplayer service. For those looking for a nice 'beer & pretzel' fantasy card game, this game fits the bill. Recommended. 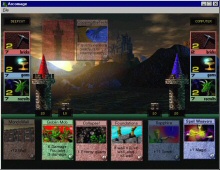