Ante-Up at the Friday Night Poker Club is an above-average poker game by ComputerEasy. The game lets you play 4 variants of poker against 4 computer-controlled players. The variants you can play are 5 Card Stud, 5 Card Draw, 7 Card Stud, and Texas Hold 'Em, but you cannot choose which one you want unless the dealer asks you. The gameplay is straightforward: try to make as much money as possible by betting and folding at the right time, and hope the lady luck is on your side. Computer players have their own playing style, and after a while you will be able to tell them apart. A nice feature is "Captain's Class," which gives you a complete rundown on all the rules of each game, as well as a good introductory lesson (complete with quizzes to test your understanding) on the basics of poker. You can also turn the Captain's advice on during the game if you are new to poker. A decent poker game... too bad there is no extensive record keeping like QQP's Lucky's Casino. 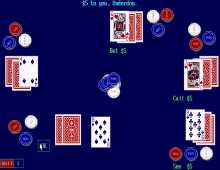