Ambush at Sorinor is an improved sequel to Siege with a lot of needed improvements such as campaign mode and better unit variety. Athough it's just a string of all missions played in consecutive order, the campaign mode is interesting and actually tells a coherent fantasy story.

Gameplay is still limited to tactical combat, where you are either a defender or an attacker. Instead of commanding a set number of units as in Siege, here you hire a number of mercenaries with your available funds and deploy them on the map. The type of mercenary available for hire depends on the type of mission taken, thereby ensuring that each mission will be refreshing and require different tactics to succeed.

There are wildly differing combatants in the game (nearly 100 types), each with their own prices, ratings (speed, attack, defense, weapons, armor) and abilities. In addition to traditional fantasy units e.g. orcs, goblins, etc., there are humorous units you can use, including battle cattle, defense lawyers, mermans and war chickens(!) Some units have special abilities you can exploit, although most of them are just different ranged attacks. A few, such as wraithes who can blend in with their surroundings, are unique and are therefore very valuable. A nice addition to the Siege engine is the ability to buy and place traps at the start of every mission.

Overall, Ambush at Sorinor is a big improvement from Siege, although it still suffers from poor AI and cumbersome interface. A well-written fantasy plot, a wide variety of battle terrain (from forests to deserts), and additional gameplay features are a welcome change, though. The built-in scenario editor has also been improved and is now much easier to use. Arguably the best game in Mindcraft's tactical combat series, and well worth a try for all budding fantasy generals and anyone who likes this genre but doesn't have a lot of free time to invest in complex games. 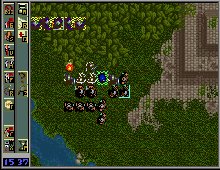