World Wide Rally from Digital Dreams Multimedia (DDM) is an average first-person rally racing game. A wide variety of rally cars and courses unfortunately do not make up for the game's many shortcomings, chief among which is the very unrealistic physics engine that makes you feel as if this is a bad clone of Carmageddon rather than a supposedly realistic rally simulation. I tried slowing the game down, but even at slow speed it still doesn't feel like driving a real car. Worse still, the game is very easy - I am by no means a racing expert, yet I was able to beat most computer opponents without really knowing what I was doing ;) The various courses - taken from around the globe - are nice at first, but you will get bored after the first 2-3 laps with the lack of detail. All in all, fans of Papyrus' celebrated NASCAR Racing series will feel short-changed but this budget title that more or less deserves it obscure status. Avoid, unless you must play every rally game ever made. 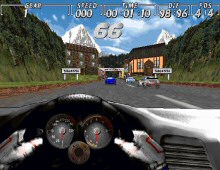