This is fun, arcade-style footie game that's supposedly "endorsed" by FIFA as the official game for World Cup USA 1994. It probably doesn't deserve that endorsement, as it has awkward controls, too few moves and options (e.g. bicycle kicks are a pain to do, and players look like clones), and subpar graphics. Still, it does have every team from that World Cup, practice mode, and a decent trivia game. Overall, it's fun for a while, but boring in the long haul. 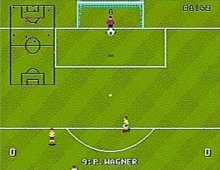