Re-release of U.S. Gold's own Italy 1990 with a few unimportant enhancements, mostly cosmetic ones. Despite the coveted World Cup license, World Class Soccer is a very uninspiring game that doesn't offer much more than the minimum you'd expect from soccer games. Simple graphics, standard ADLIB music, and pretty boring gameplay. Ball handling is very poor, as is the AI of computer-controlled teams (who don't seem to know what "defense" means). A downright waste of license... only to be recommended for people who want to have every soccer game ever made. If you want a fun game, look elsewhere. 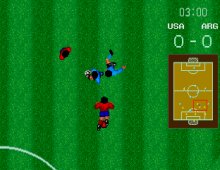