Graphics is now isometric, and player animations are very smooth. Gone are the jagged players that recall Konami's Blade of Steel, and the new sound effects are excellent. Computer player seems to be even better than WGH at offensive play and penalty killing, and there are many more teams and players to choose from. If you love WGH, you'll be hopelessly addicted with WGH2. Be warned, though: the game is VERY fiddly on new systems, and due to unconventional video modes, you might not be able to run it at all, even in DOS mode. 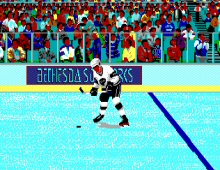