More of a "mini-game" than a real game, Volvo S40 Racing is a promotional title developed by Digital Illusions using the Motorhead. The game was commissioned by Swedish carmaker Volvo to promote their racing team. The game features two tracks designed especially for Volvo, the Volvo S40 car itself, and the same fun gameplay you would expect from Motorhead. If you liked Motorhead or good racing games in general, this relatively unknown promotional game is well worth your time - and will give you much more gameplay than a typical promotional freebies. Highly recommended, but just be aware it's not a full game. 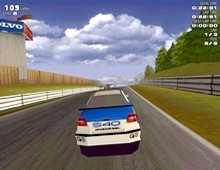