Test Drive: Off-Road is a disappointing entry in Accolade's classic Test Drive series. Even a rocking soundtrack cannot save this marginal game from mediocrity. Greg Kasavin's review at GameSpot says it all:

"The ancient conflict of man vs. nature rears its proverbial head once again in Off-Road, Accolade's latest entry into the venerable Test Drive series. The human-made racetracks and highways of common racing games give way to dirt, snow, and mud paths in Off-Road, and you can heed their calling in a military Hummer, a classy Land Rover, a rugged Jeep Wrangler, or a rock-solid Chevy truck in a mud-soaked race to the finish line.

Buckle up in one of said road hogs and take to nature's trails in a dozen different tracks, ranging from temperate to snow-covered to desert. You'll race against three other opponents at any one time, and split-screen and network options are available if your friends think they can take you on. And if you're fast enough to dust the competent computer-controlled competition, you'll unlock several hidden vehicles, including a monster truck and a dune buggy.

Test Drive: Off-Road is pure arcade action: Speed, cornering, and the handbrake for those extra-sharp turns are all you need to worry about. You'll take some big spills in Off-Road, but your ride's performance will never falter. Even if you tumble over, you'll magically reappear rightside-up to continue the race. But beneath the simple gameplay, Off-Road boasts a cleverly realistic physics model, as your truck will convincingly bounce over rocks and ditches and topple if you hit a bump during a sharp turn. The assorted vehicles handle differently, while various road conditions add still more variety to the race. Each track is pleasantly spacious and unrestricted, and (as the title suggests) you needn't stick to the road at all. Indeed, if you're hoping to bust some records, you should count on having to take a shortcut or two. Just make sure to pass every checkpoint along the way.

A down and dirty 3-D engine powers the action, while authentic sound effects and appropriate musical accompaniment by Gravity Kills add flavor to the package. Gravity Kills' soundtrack, reminiscent of Nine Inch Nails, works well with Off-Road's gritty theme. And the sound effects are effective, though slightly underpowered. (And yes, you can honk the horn.) The game looks great at maximum screen resolution with all options enabled; each vehicle is painstakingly true to life, and you can choose its color and styling before you take to the track. Each machine takes visible damage as you beat it up, while the three styles of tracks all look satisfyingly natural. Unfortunately, Off-Road runs as slow as tar on a Pentium-133 when all the fixins are enabled, but you can modify the polygon and texture redraw to better optimize it to your computer. However, even at maximum visibility there is still a noticeable case of polygon pop-up on the horizon. At the same time, of the many camera angles available only a handful are effectively playable, though the rest are nice to look at in the race replay.

While Off-Road is not a complicated or particularly sophisticated racing game, it has solid control and fast, wholesome action and proves to be a welcome change of pace from many of today's racing titles. This is an unpretentious title that works well as a quick fix of thick mud and big trucks, and it's a lot of fun over a network. While it's not quite as good as the real thing, Test Drive: Off-Road sure beats paying through the nose for insurance and having to go through a car wash three times in a row." Fans of driving games would do well to stick to earlier Test Drive classics. 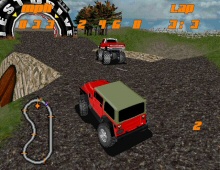