Virtual U is one of the most unique games and I don't think any other game has ever taken the challenge to make a simulation of run to run an university. There really is a difference between running a railroad company, city and a university since this is the first time you get the chance to do this in a game.

The game was originally made in order to offer better understanding of how the management of a university is done and all the many different things involved as well as the decisions that needs to be taken. The developer of the game, Trevor Chan, is the same as the one developing Capitalism Plus and the Seven Kingdom series as you can see that as well in the game as it does draw some parallels between the two games.

Virtual U is very detailed and there almost thousands of things you need to take care off. You start the game by setting certain goals for the next school year and the biggest challenge in the game is of course to succeed in things and at the same time stay within your budget and you will otherwise go bankrupt. Let me state that the game is very hard and therefore also very challenging. You will most likely not know all of the different things in the game until after at least a few years have been played in the game. A well done simulation being the first to offer the chance to run an university.

Virtual U is a unique and realistic "university management simulation" - the first and so far the only game of its kind. Designed to foster better understanding of management practices in U.S. colleges and universities, Virtual U provides educators and everyone else a unique opportunity to step into the decision-making shoes of a university president. As president, you will be responsible for establishing and monitoring all the major components of a higher learning institution, including everything from faculty salaries to campus parking.

As one might expect from Trevor Chan, the brain behind Capitalism Plus and Seven Kingdom series, Virtual U boasts a challenging computer AI, realistic underlying economic model that takes into account hundreds of variables, and a clean user interface. Given the game's very narrow and esoteric focus, though, the learning curve in Virtual U is naturally much steeper than in Trevor's previous games. The game is driven by a powerful simulation engine that models five broad areas in university management: resource allocation and finance, academic operations (including faculty hiring and course scheduling), enrollment management (including university prestige), physical plant activities, and performance indicators. Similar to Capitalism Plus, it will take you many months of game-time in Virtual U - including much trial-and-error - to understand the interconnected relationship between these areas and how to enhance the university's reputation and expand its operations without breaking the bank.

The gameplay is similar to SimHealth and most presidential election games: at the beginning of every game year, you must establish broad goals for the institution for that year. You do this by selecting objectives from a given list, such as "pay [faculty] better," "reduce tuition," "enroll more minority students," "win [sports] games," and so on. You can even choose "balance the budget" if you are confident of your skills ;) After setting the goals, the clock will start ticking. The game interface, like Trevor's other games, is intuitive and cleanly laid out. You basically move around the Virtual U campus, visiting the relevant building where you gather information to make policy decisions such as decreasing faculty teaching time, increasing athletic scholarships, changing minority enrollment policies, and many others. As in a real university, many decisions have both positive and negative effects or ramifications, and often the timing of policies can spell the difference between success and failure.

As in real universities, Virtual U's Board of Trustees monitors your every move, and will give you an annual evaluation of your performance at the end of each fiscal year. The Board's evaluation letter is very useful and detailed. In addition to commenting on your overall performance, the letter singles out areas that you can improve, such as alumni giving, faculty morale, and institutional prestige. After viewing the letter and year-end balance sheet and profit/loss statement of the university, you can alter the budget and broad goals before moving to the next year.

Like Trevor's other games, Virtual U is a fun and challenging game that is realistic enough to be used as an educational tool. Just as Capitalism Plus is still used in business schools worldwide, Virtual U is being used around the U.S. to train professional university administrators and education students. Its specific subject matter makes it a "niche" product that may not be everyone's cup of tea. If you are interested in well-designed business/management simulation or are curious about how universities are run, though, Virtual U fits the bill. Formerly commercial title, version 2.0 of the game has been made freeware, thanks to the support of the Alfred T. Sloan Foundation. 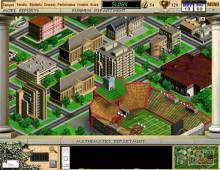 People who downloaded this game have also downloaded:
Entrepreneur, Imperialism, Crime and Punishment, What They Don't Teach You At Harvard Business School, Constructor