What They Don't Teach You At Harvard Business School

One of a handful of games ever made about sports management, What They Don't Teach You At Harvard Business School is an excellent business simulation based on Mark McCormack's classic book. In case you are not familiar with the man, Mark McCormack is the founder of International Management Group (IMG), a multimillion-dollar, worldwide corporation that is a consultant to fifty Fortune 500 companies, a major producer of television programming. He was credited as the single most important influence in turning sports into big business, and his book is a New York Times best seller many years in a row. The game casts you as the CEO of IMG, and as in McCormack's real life, your task is to lead the company to fame and fortune in 25 years, from its humble beginnings in 1960, to worldwide fame in 1985.

There are many things to like about WTDTYAHBS (boy, what an acronym) aside from the compelling license. The game is broken up into three "acts" in a chronological order that parallels IMG's growth as a company. In Act 1 (1960 - 1968), you will focus your attention on professional golf. Your task is to sign golfers for IMG to represent, and negotiate endorsement, appearance, and licensing deals for them. At the same time, you will be expected to hire qualified employees to work for the company. You must delegate tasks for your workers that match their education and previous work experience. Act 2 (1969 - 1982) makes the game more complex by adding two more areas: professional tennis and TV production. Just as you did for golfers in Act 1, you will sign and negotiate deals with tennis players. Your newly-formed television production unit will handle the technical production for golf and tennis events; as with the first Act, hiring experienced executives to oversee the department is key to success. Finally, Act 3 (1982 - 1985) is the ultimate test of your managerial savvy, as you will now produce your own special sporting event that will be broadcast on television in the epilogue of the simulation. With this goal in mind, you will focus your networking efforts on meeting the right people to make the event work. Then, you will negotiate the contracts for the event and manage your staff so everything runs smoothly.

Gameplay in WTDTYAHBS is turn-based: each day, you will read messages in your in-box, attend networking events, negotiate and sign athletes, hire and fire executives, and plan events on your calendar. Despite being an all-text game, WTDTYAHBS offers an excellent interface where you can easily access all gameplay options and features. The underlying economic model is solid and quite realistic as far as I can tell, although certain things, such as the increment of contract amount you can offer during negotiations, seem a bit too random. True to McCormack's real life, the game places a strong emphasis on hiring the right people to manage different parts of your business, as well as the importance of networking events. Little details, such as daily sports news, add a lot to the atmosphere of the game. WTDTYAHBS even has on-line coach option you can turn to when you are unsure about what to do, and it keeps track of your performance in 3 areas: management, negotiation, and networking. One feature I really like that I haven't seen in any other game is the "recommended reading list" that the game prints for you whenever you quit, based on its evaluation of your current performance. Talk about combining fun with education :)

With a great book as a basis, strong game engine, and excellent presentation, WTDTYAHBS is a must-have for anyone who is interested in how sports management companies work, or even fans of games such as Hollywood Mogul which emphasize negotiation and interpersonal skills. Highly recommended! 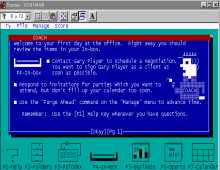 What They Don't Teach You At Harvard Business School screenshot