A fun arcade racing game that features great animations of cars and a good variety of courses, Turbo Champions' only weak points are the subpar handling of cars (i.e. cars seem to have too much "inertia" when you turn the wheel), and repetitive scenery. It's not Outrun, but it isn't bad, either. Extra features include a course designer feature that in conjunction with Deluxe Paint II enables the enthusiast to produce and race on his own courses. 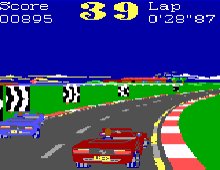