Its time to put on your swimsuit, drop a coin down the coin slot and take a trip down the roaring rivers in the pursuit of treasures, spare patches for your tubes, as well as soda cans and six packs to fire at your enemies along the river....

Toobin' is a great conversion of Atari's arcade classic from 1988. Typical arcade fun, and the premise is quite original and could be considered a "sport" title due to the setting (water amusement park), and the fact that it's a race in disguise. As usual, the PC conversion is miles away from the arcade game technically, but gameplay is nearly the same. The major difference: Just one joystick - while the arcade game used two to control both arms of your Toob Dude individually. 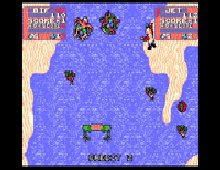 People who downloaded this game have also downloaded:
Super Dodgeball, Total Knockout Boxing, T.K.O., Lemmings 2: The Tribes, Lemmings Chronicles, The (a.k.a. All New World of Lemmings)