Hands down one of the most fun and versatile off-road simulation games ever made, Terep 2 is a wonderful freeware racing game that is amazing on both gameplay and technical levels. Also known as Deformers, the game was developed by Invictus, a small Hungarian team who later developed the improved commercial sequel called Insane, published by Codemasters in Europe only.

Terep allows you to drive great-looking, realistic 3D cars on various surfaces. Similar to Stunts, you can drive anywhere you want ? on the tracks, off the tracks, into the fields and beyond. Absolute freedom, in other words. The 3D physics engine is very well-coded - even the cars get deformed as you bump into roadblocks. In many ways, Terep 2 is a "work in progress" version of Insane, but the high production value will keep you occupied longer than many commercial games. In addition to the tracks included, you can create your own tracks using paint programs such as Paintshop Pro. The "mega" version (the one for download here) includes over 30 tracks made by the designers and fans. The game looks great, and plays great especially in two-player splitscreen mode. If you are a fan of off-road racing, it doesn't get much better than this little-known freeware old game. A must-have for racing fans! 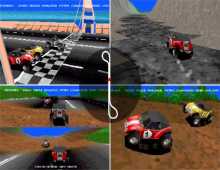