Can't say that there are many people that have tried to develop a game within the exciting (at least I think it is) cycling sport. I have only heard of Cycling Manager 1 and 2 which have both been published in the beginning of 2001 and 2002. But Super Tour was one of the first games in this genre though. I really wish more developers would take up the challenge.

Super Tour 3 is actually based on several other cycling games developed by the same guy as well. Starting from a Dos based game it ends up with a Windows based game with many improvements compared from the first game in this series of you can call it that. You start the game by selecting a team and then whether you want to play a full season or just race a single cycling race. After that you can manage your team including transfer of your riders. During each race you can give orders to each single rider and view the entire race. Sometimes it is a bit boring just watching all the riders next to each other but at the end of a stage the game is quite exciting.

The graphics are somewhat good with excellent camera angles that can easily be changed. Not much sound is included but it isn't needed either since the actual management of the riders is the most important. Super Tour 3 is one of the best games in this genre. Although it doesn't say much since very few games have been published in this genre it would still be true even if there were more of these games available. If you are lucky you can also find updated game data like rider names etc.

Possibly the best (and maybe only) cycling management simulation ever made, Super Tour 3 is a very comprehensive and feature-rich freeware sport simulation for Windows 95 and above. Coded entirely by one designer, the game is the latest release in the Super Tour series that dates back to 1996. The game lets you control either one rider in an individual time trial (ITT) competition, or the whole team in a team time trial (TTT) competition. You can compete in any of the 4 general winning criteria in cycling: by times, mountains, regularity, and teams. Up to 22 teams with 9 riders each can compete in three of the world's most prestigious cycling tournament: Vuelta a Espana, Giro d'Italia, and Tour de France. If you prefer, you can also create your own personalized teams and seasons, complete with transfer market and qualification rounds.

Your goal in the race is, of course, to be the first rider (or team) to reach the finish line. But in contrast to a typical cycling game like Motocross where you need only good reflexes to win, Super Tours 3 is a true sport management sim that requires good strategies that best suit the situation. As in real cycling races, you must gain points for reaching certain mountain passes, as well as points for regularity. Since time trials stages of ITT are scored differently from TTT, the orders you can give your riders are also different. Typical orders range from attack (i.e. break away from the team at increasing speed), fall behind, pursue a specific rider, carry another team member (i.e. change speed to match that of a selected rider, so that the 'carried' rider can spend less effort on the race), or lead the group in an attempt to change the team's rhythm. The cyclists automatically decide whether to go alone or in a group until you change his order. He will also sometimes disobey your order for a variety of reasons: either he's exhausted, or your order makes no sense (if you tell him to pursue a rider who has abandoned the race, for instance). Orders given in the zone prior to the start line won't execute immediately, but the riders will memorize them to execute when the race starts.

As in long-distance cycling in real life, striking a balance between speed and energy is key to success. Thanks to the game's good interface, it is easy to monitor your riders' status: a horizontal bar shows energy level, a heart shows rhythm, a test tube shows water (i.e. thirst) level. The amount of effort each rider spends to carry out your order depends on a number of factors: speed, wind, terrain, and the order itself ("lead group" order takes much more effort than "fall behind" for example). Each rider starts with 2 water bottles, and will take a sip automatically as he needs it. If you don't plan your strategy well, however, the rider will be so exhausted he will retire from the race completely.

The game looks pleasant in SVGA resolution, with good details of the different teams and background scenery - which is all the more amazing considering this is all coded by one man, and is a freeware game. The computer opponents are quite competitive and challenging, requiring you to be on your toes at all times. The strategy component of the game is considerable, because each new stage requires a different strategy from the last, due to different route, terrain, wind, etc.

Overall, Super Tour 3 packs enough gameplay value to entertain any cycling fan for a long time. The game is good enough to qualify as a commercial game, so it's a big bonus that the designer released it free of charge. 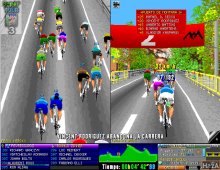