Snowboard Racer is a fun snowboard racing game from Hammer Technologies. The game offers 3 different competitions that all require the main ?ingredients? of snowboarding: high downhill speed and acrobatic jump skills. In "Boardercross" competition, you will compete against computer-controlled opponents or time in an exhilarating downhill race where board control and speed are essential. If you are more interested in pulling off jumping tricks, "Big Jump" competition is for you: it takes place in a ?multitrack? stadium where you have to try to get the highest possible score by showing off your best moves, performed after jumping off the ramp. The ?Jumping? races combine both downhill race and acrobatics into an all-around competition.

One of the best things about Snowboard Racer is innovative types of oppoents. For any of the 3 competitions, you can choose to compete against "ghost" racer, other racers, or time. The most interesting competitor is the "ghost" racer - a surfer who imitates your own movements so that you?ll have to ?overcome? yourself to beat him or her. You can also compete against other computer-controlled racers, each of whom sport different characteristics and playing style. You can also race against time: trying to reach each new checkpoint before time runs out.

The game sports excellent 3D graphics, with realistic weather effects and passage of time - playing snowboarding right before dawn makes for a memorable sigh. There are over 14 different types of acrobatics and 5 different kinds of turns in the air are at your disposal to pull off.

With an excellent variety of gameplay modes and memorable landscapes that encompass slalom poles, canyons, tunnels, forests, and a jump track with multiple ramps, Snowboard Racer is a fun snowboarding game that will keep fans of the sport happy. The only two major downsides are the lack of multiplayer modes, and the cumbersome controls that make some moves difficult to execute. Snowboard Racer may not be as ultra-realistic or as advanced as Tony Hawk or other recent releases, but it's a lot of fun and realistic enough to keep snowboarders interested. Worth a try at least. 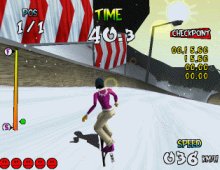