Snowcross is an above-average snowmobile racing game from Wanadoo. While it is not as fun as Konami's popular line of snowboarding games, it is still a fun game that introduces a few interesting innovations in the genre.

As in most other racing games, you can choose from 3 gameplay modes: single race, tournament, and league. In the tournament mode, you must win 3 different leagues in sequence. In both league and tournament, the races take place both during daytime and at night. The graphics - especially during nighttime - is excellent, taking full advantage of 3D cards to offer very detailed snowmobiles and scenery.

There is a nice sense of progress in the game: you can win points on races by performing tricks and stunts on jumps and falls throughout the races. With enough points, you can rig and modify your snowmobile for better speed, etc. Winning multiple races will unlock extra tracks and new bikes. In another nice touch, you can win races in any way possible - including underhanded ways such as forcing your opponents off-course and knocking them from their bikes. You can also can move off the track to find short-cuts and alternative routes to the finish line. With 12 racing courses (actually 24 if you consider how different they look and feel during day/night) and 18 different snowmobiles, Snowcross offers more than a few hours of solid gaming.

So what prevents Snowcross from being a top game? For all its high points, the actual race is not executed very well. The computer opponents, for example, is not very smart, and pursues an annoying strategy of letting you lead the whole race, before speeding up and trying to ram into you during the last 10 meters of the race. The graphics is also suspect - I don't get much of the feel of racing on *snow* - the tracks feel too smooth and the snowmobiles "glide" too easily. All in all, it's a competent game with enough production values to entertain you for a while - if you don't look too closely at realism. Recommended. 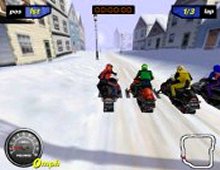