One of the most innovative and well-rounded soccer games ever, SuperStar Soccer was designed by wunderkind designer Ed Ringler whose SuperStar Ice Hockey won critical acclaim that was unfortunately not translated into big sales. And so it is with this solid game that strikes a great balance between exciting arcade action on the pitch and coach / strategic option.

Although gameplay in SuperStar Soccer emphasizes joystick dexterity, there are many realistic factors that add tremendous depth and longevity to the game. For example, putting an older player in the game too early may tire him out late in the game when you really need his expertise, and choosing COVER defensive strategy will make all your teammates play tight man-to-man coverage. And when it gets right down to pitch action, SuperStar Soccer has it in spades: it deserves to go down in history as the first soccer game ever to implement bicycle kicks and headers in fluid, convincing motion that isn't impossible to execute. Besides these impressive moves, the game allows a surprising range of moves with intuitive joystick control: you can do a quick shot, speed up to catch the ball (if power rating is above zero), and leap as a goalie to make a save. One very innovative feature is the indicator bar that shows which side of the goal your shot will travel-- a very nice feature that hasn't been seen since. Playing rough may also earn you a penalty, and your player is susceptible to injury if he bumps into an opponent too many times.

With the ability to recruit and trade players, as well as training your team, the only thing SuperStar Soccer doesn't include is actual team names. But don't let that discourage you-- the game packs more than enough feature and fun to occupy soccer fans with fictional SporTime league for hours on end. A stellar achievement, especially considering its age. Highly recommended. 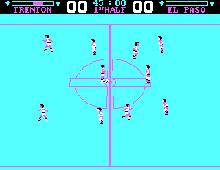