Last in Microids' lackluster trilogy of skiing games is Super Ski 3, which boasts significant graphical improvements over the previous two games in the series, but unfortunately not playability. The best feature from Super Ski 2 is left intact: the tournament takes place in different locations around the world. You can practice in any event before the tournament, compete solo against the computer or friends.

Similar to the previous 2 games, player animations are not as smooth as Accolade's game, but they are decent, and the controls are easy to learn. Unfortunately, the game is still much more difficult and less playable than Winter Challenge. You view the action from third person perspective instead of first person, so judging the distance is trickier. Also, there are more obstacles and curvy paths in most events, so fast reflexes are required.

Overall, Super Ski 3 is a disappointing winter sport game that could have learned from the playability and excellent user interface of Winter Challenge. Although the controls and graphics are a big improvement over Super Ski 2, they did not improve enough to warrant anyone's attention. Not recommended, unless you just want to complete your Microids/winter games collection. 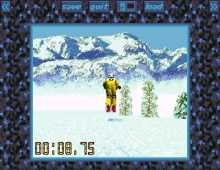