Subbuteo is a solid PC version of the popular miniature soccer game in the UK that most kids grow up with. Similar to Foosball in the US but much more akin to the actual game, Subbuteo the tabletop game is still widely popular and sold by Hasbro UK.

This computerized version by Goliath Games does come very close to the real thing, except that, perhaps not surprisingly, the game is slower and more tactical than the real thing. One of the game's best features is the excellent user interface. To kick the ball, you first select the player you want, rotate an arrow to choose which direction to kick (or "flick" in Subbuteo parlance), then hold the fire button down while the strength of flick bar goes up. When you release the fire button a second "swerve" bar goes up. Press fire in the middle of this bar for a straight flick. You get more swerve on the ball the further away from the middle you press. These selections are done "real time", so timing and reflexes are crucial. The computer player is very good at swerve, and his defensive flicks are very accurate. You can consult comprehensive Subbuteo rules at any time during the game, and the game even offers the relevant section of the rulebook automatically whenever you make a mistake. Overall, Subbuteo is an excellent computerized version of a unique tabletop soccer game that is well worth a look, whether or not you have played the original before. Highly recommended! 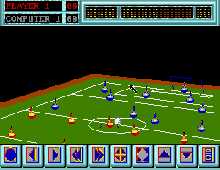