Street Racer is a fun and very little known PC conversion of a Playstation game of the same name, which was in turn based on a 1994 game for the Super Nintendo. Street Racer is basically a Super Mario Kart-style cartoon go kart racing game. Up to 4 players can compete on the same computer, or you can play against 7 computer-controlled players in a race to the finish. In the same wacky style that characterizes Super Mario Kart, you will encounter bizarre opponents armed with weapons that are as crazy as their personalities. The game offers 8 different vehicles with different speed, haste (acceleration), and resistance levels. On the tracks, you can collect power-ups like bombs, nitro fuel, or health packs while trying to get ahead of other cars -- or blow them out of the race entirely.

The cartoony graphics look as nice as the Playstation version, and the controls are intuitive and fluid. There is a lot of character to the game: each of your opponents, for example, has different individuality - they drive differently and will use different attacks against you. You also can reach a secret challenge if you can beat them on all 28 tracks and 3 leagues. Overall, Street Racer is a fun game, and a nice alternative to SuperKart on the PC. It's not as good as Super Mario Kart, but it's still a lot of fun, especially if you play against friends. Recommended! 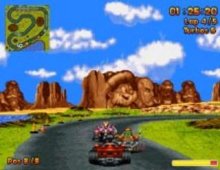