Speed Rage is a simple arcade-ish fantasy racing game that lets you race either a dune buggy or a boat on various tracks. The game is decent, but it doesn't really have anything to make you quit, say, Big Red Racing. Car controls are very simple, and the complete disregard to real-world physics results more in frustrating gameplay than fun. For example, rounding a corner is almost impossible without hitting curbs, because the game is far too sensitive. But on the other hand, hitting obstacles on the road result in little more than a brief slowdown of your car. All in all, a very average game that really deserves to stay unknown. Although, the game does have a nice modem and network support for those looking for a quick multiplayer game. 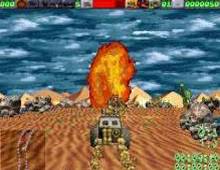