Soccer Cards is a unique football (soccer) game from Michael Douglas, an amateur game designer. Basically a football game that is played by cards, you play the game by using a set of "match cards," each of which depicts a situation in play such as a goal, shot, pass, tackle, penalty, etc. While chance plays a big role in the game, sound strategic use of these cards is a key factor to success, since it increases your chances for scoring, and lessen the same for your opponent.

The game is easy to learn and play. You can choose any 2 teams for a friendly match, or go for the career mode which puts you in charge of a team, not unlike soccer management games. Starting as a rookie manager, you will gain opportunities to manage bigger clubs as you meet the board's expectations. Soccer Cards includes all teams in the top 8 British football leagues, as well as all British and European tournaments. The latest version allows you to change "skin," i.e. card graphics, so you can change the graphics of any card if you don't like the way it looks.

With a unique premise, fun gameplay, and a real reliance on strategy as opposed to pure luck, Soccer Cards should appeal to both football and card game fans who want something a little different from normal. Highly recommended, especially as a 'coffee break' game you can finish in 15-20 minutes at a time. 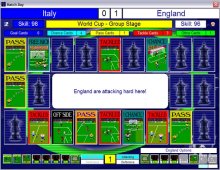