One of the best "physics-based" games I have ever played, Ski Stunt Simulator is a great game that superbly emulates the physics involved in performing acrobatic ski stunts. In addition to a very authentic physics engine, the game boasts an ingenious and very intuitive 100% mouse-driven interface. The Rocket Download review explains it well:

"[This game] is a great download if you enjoyed Deluxe Ski Jump, a long-time favorite featured on this site. The game attempts to emulate the physics involved in performing acrobatic ski stunts. The results are purely entertaining. This shareware version contains a complete tutorial and a set of exercises, and lets you play the Beginner rounds. Learning how to play is very easy; you use your mouse to control the skier's movements. Eventually, you'll pull a variety of stunts, from the triple front to the back flip.

The game is designed to have no pre-scripted movement, meaning that gameplay is entirely dependent on your actions. You may consider it freestyle skiing. Indeed, the best part is attempting unbelievable stunts and crashing in the most horrendous ways possible. If you fail, simply press the space bar to try again. Your skier is very flexible, enabling you to tuck or extend the body for particular stunts. In fact, you may create entirely new stunts by playing around with the controls.

The registered version enables you to capture videos of your stunts, which can be submitted to the author's web site [which is now defunct unfortunately - games]."

Although the mouse-based interface takes a lot of time to learn, with enough practice you can perform an amazing array of stunts that range from double front and back flips to over-the-wall jumps. The levels range from easy (do a stunt across a hill) to very challenging (start on top of two crates, and perform stunts over chasms and houses). Whether or not you like skiing games or physics simulations in general, Ski Stunt Simulator is a unique and excellent game that you wouldn't want to miss. 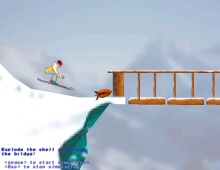