Power Surge is a decent drag racing game from MicroStyle. An exciting sport that is unfortunately not simulated enough by racing games, drag racing is a contest of acceleration and raw speed between two cars over a distance of a quarter of a mile. In the game, you race side by side against your opponent against elapsed time (ET). This allows two cars of different performance specifications to race with "ET handicap." The way ET handicap works is interesting: after enough practice on the track, you will know roughly what your final time should be in a race. The information of this time (called the "Dial-in time") must be given to the organizers at the start of each race. Therefore, your objective during the race is to match or - better yet - go under your Dial-in time by a margin that is less than your opponent.

Unfortunately for drag racing fans, Power Surge is merely a competent game but not a great one. The game's car physics leaves much to be desired, and there are not enough gameplay options to keep die-hard players satisfied for long. But if you are get bored of better drag racing games such as Bethesda Softworks' Burnout: Championship Drag Racing, Power Surge is a decent filler. 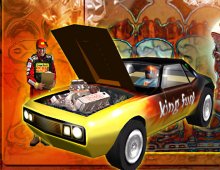