Tim Chown of Games Domain says it all about this excellent and highly underrated pool game from Mirage/Gremlin:

"Pool Shark features a dozen or more pool halls in which you can play, each with a distinct appearance and style, from traditional halls, through casinos to a room that looks like it was yanked right out of an early level of Half-Life. The tables vary with the rooms. At first the differences are most obviously in size, but before long you'll run into some bizarre tables which don't follow the usual rectangular six-pocket style...one is square with only four pockets, others get much weirder. Forutnately, these are optional. The designers have gone to some trouble to provide a variety of playing conditions, and to a large extent this comes off pretty well.

The player AI is not exactly great, but the positional shots played are sometimes good -- though whether by accident or design is hard to tell at times. The AI is, unsurprisingly, not up to that of a good human opponent, and, like Virtual Pool 2, you'll see the it making some suspiciously good 'out of character' shots (though perhaps not so many as in VP 2). Game variety is also good. There's all the expected options, namely three-ball, six-ball, eight-ball (UK and US), nine-ball and 10-ball, plus straight and rotation pool. On top of that are half a dozen more esoteric variants: speed pool (in which you try to clear a rack as fast as possible), killer (where you have three lives and lose one if you fail to pot a ball), 10-pin (in which you score racks like ten pin bowling -- a complete clearance in one visit is a strike), one-pocket (where each player has to pot into one pocket only), bank pool (you can only bank -- or double as we say in the UK -- balls to pot them) and cut- throat (in which you can play three-player with five balls each and you try to be the last person left with only their ball on the table). Depending on whether you play in hustle, match, or tournament mode, different types of game are offered to you. If variety is what you want, Pool Shark is jam-packed with it.

At the heart of the game lie ease of control and ball physics. Control is much the same as all pool games these days -- right-click while moving the mouse to rotate your aim, left click and pull/push the mouse to make the shot. You can also raise or lower your butt (of the cue!) and apply side/english as desired. As with VP 2, if there's a ball or cushion in your way, you have to cue over or around it. There's also a button to snap to an overhead view which allows you to quickly assess the table position. Overall, nothing new, but nearly everything you need -- the only feature I miss from VP 2 is the ability to move the viewpoint on the table, e.g. to see if one ball will pass another into a pocket.

The physics of the game give me some concern. The first thing you notice is that the tables have tight corner pockets -- chances are that a ball won't drop if it touches a rail. As a snooker player I'm used to that, but a US pool table is usually more generous. The middle pockets are ultra-tight, to the extent that I have seen a ball miss and then gone to the overhead view to see it magically hovering over the hole. Not good. The break is another problem -- in nine-ball you can get a power break and send the balls flying, but in eight-ball, the 15-strong pack just won't smack open, however hard you can manage to play the break. Side/english also feels wrong. It's overdone, most notably with transmission of side to object balls, something which theorists will argue is/isn't possible, although object balls can get spin on them from other means. Anyway, this is heavily overplayed to the extent that a ball might hit a cushion and almost come back in the direction it came from. Were the 'oddities' of the physics rare events I would let them pass, but they're not.

Overall, Pool Shark has a lot going for it. The game looks good, the variety of pool halls, tables, opponents, and game types are all commendable. The 3D-rendered opponents with their distinct mannerisms and playing styles are a huge step forward in PC pool technology, and a very welcome one. The hustle mode is also quite novel and very enjoyable. However, while these features all impress me, the nitty gritty of the physics leaves me a little frustrated."

The game also includes a comprehensive array of multiplayer modes, and a nice tutorial that teaches you both the basics of pool and valuable techniques. It is not as good as Virtual Pool series, but it is still a lot of fun. Recommended for casual pool fans who don't mind some physics flaws if the atmosphere is immersive enough. 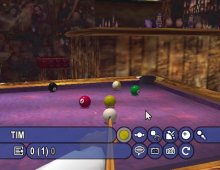